The creative collaboration between studio producer Mike Collins and vocalist Aurora Colson that began in the summer of 2010 is now ‘bearing fruit’ with a healthy schedule of releases on Rude Note Records that commenced in October 2011:

“Fortune Teller” was written by Allen Toussaint under the pseudonym Naomi Neville and first recorded by Benny Spellman in 1962. Michael and Aurora both sing the lead and backing vocals along with the ‘whoops and hollers’ and vocal effects. Michael plays all the instruments on this version, including acoustic and electric guitars, bass guitar and various hand percussion instruments, with Aurora Colson joining in on handclaps. Graham Dean plays the drumkit on the full mix.

“Light My Fire”, originally released by the Doors, became an enormous ‘hit’ for Jose Feliciano in the summer of 1968.

As Mike explains: “This version of the song was influenced more by the Jose Feliciano version than by the Doors version. It actually started out as a drums and percussion jam with Marc Parnell playing the drumkit and Aurora Colson playing an Iranian Tombak hand drum – and they didn’t even realize I was recording them at the time!

Later, I added some tambourine, cowbell and shaker, then guitarist Jim Mullen got inspired to play ‘Light My Fire’ to this rhythm. Aurora Colson overdubbed harmony chorus vocals and vocal effects during Jim’s guitar solo, then sang the lead vocal on this version. The final ingredient came in the form of Winston Blissett’s bass line… enjoy!”

Many people will have heard this song which was featured in the Walt Disney film “Dumbo” first released in 1941.

Aurora suggested recording this for Mother’s Day so Mike listened to several versions to find a musical direction for the recording: “Inspired by hearing Alison Krauss’s version of the song that Dumbo’s mummy sings to him, I put this arrangement together with Aurora’s help. I played acoustic guitar, a Timple from the Canary Isles, some mandolin, bass guitar, pedal harp, piano-accordion and some hand percussion, while Aurora added several well-chosen single notes on the piano as the ‘icing on the cake’!”

Originally a hit in France for Vanessa Paradis in the late 80’s, Mike developed this arrangement of the song as an ‘acoustic’ version to perform with Aurora. The hypnotic guitar pattern that runs throughout most of the song is relieved at the intro and near the outro by a distinctive descending musical figure. After the lyrics have all been sung, Aurora adds beautiful improvised vocal melodies that drift around the stereo ‘soundstage’, surrounded by spooky echoes, before disappearing into the distance…

“Aurora asked me to work out an acoustic guitar arrangement for this song – one of her favourite old-time French songs,” Mike explains.  “I used a finger-picking style that seemed to be the best choice to fit with our other acoustic repertoire.”

Written in France in 1866, with words by Jean-Baptiste Clément and music by Antoine Renard, the song was dedicated to a nurse who was killed in the Semaine Sanglante (‘Bloody Week’) in which French government troops overthrew the Paris Commune (a government that briefly ruled Paris from March 18 to May 28 in 1871).

If you like the way that Madeleine Peyroux blends folk, blues and jazz influences, often singing in French, then the second track, another of Aurora’s favourite French songs, is definitely going to appeal to you!

The lyrics to “Verlaine” are actually a famous poem by Paul Verlaine called “Chanson d’Automne”, which was set to music by Charles Trenet in 1941.

Aurora worked out the chords on ukulele then we performed this ‘live’ for several months before recording our version.

“After recording the ukulele, Aurora really pushed me to explore lots of musical ideas to build up the studio arrangement.” says Mike. “I tried lots of parts on different instruments, keeping or discarding these as it quickly became obvious which worked best. We were both especially pleased with my bottleneck guitar parts and Aurora’s whistling, which, together, bring a very quirky ‘old-time’ feel to the whole arrangement.”

Released on December 1st for Christmas 2011, this is a ‘foot-tapping’ jazzed-up version of the classic Irving Berlin song.

Aurora sings this in English first, then changes to her native French language… which worked out so well that she also sang the whole song in French – included here under its translated title “Noel Blanc”.

I developed this band arrangement after hearing Hamish Stuart’s recording of the song a few years ago. Jim Mullen plays the jazzy guitar stuff with Roger Beaujolais on vibes, Winston Blissett on bass, Blair Cunningham on drums and a guest appearance from Bill Mudge on Wurlitzer electric piano.

I play pedal harp, percussion, accordion, sampled violins on the White Christmas version,  and electric guitar in the middle section – which also has a ‘cameo’ appearance by steel drums player Samuel Dubois on the “Noel Blanc” version!

Click here to listen to “Noel Blanc” on SoundCloud 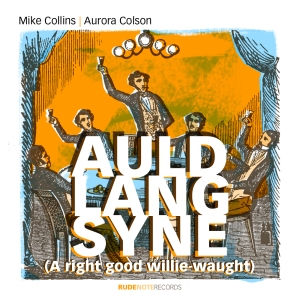 “A right good willie waught” – New Year’s Eve is the one night of the year that people all over the British Isles have a good will drink together (a good willie waught in the Scots dialect), join hands and sing Auld Lang Syne to make sure that their friendships will never be forgotten… Here is a quirky rock/pop version of the song we all know, featuring Aurora Colson on vocals.

After recording the lead vocal, I ‘doubled’ this by playing more or less exactly the same thing using ‘bottleneck’-style electric guitar, then I asked Aurora to add some chorus vocals in harmonies at the end. These sounded so good that she suggested putting these as an acapella introduction.  I placed these so that they dropped right onto the opening chords of the instrumental introduction – and this worked out just great!

The musicians playing on the recording include all the usual “Mike Collins and Friends” regulars with a guest appearance from another old friend, rock guitarist Jay Stapley.

For the instrumental version, I recorded the melody on guitar using my 1940′s Epiphone Broadway acoustic with De-Armond pickup playing this through a custom-built Swart AST Pro guitar combo amplifier. 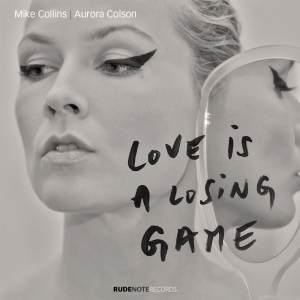 … many of us would feel the same way!

Click here to listen to Hymne à l’Amour on SoundCloud 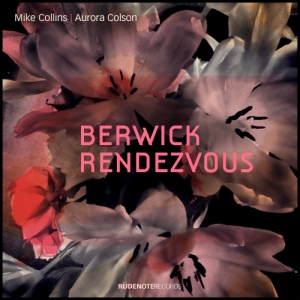 Released on iTunes just in time for Valentine’s Day 2012, this song tells the story of a young woman meeting a guy for the first time at a party and immediately falling under his spell – a classic ‘love at first sight’ situation!

As Mike explains, “The song was actually written in June 2010 when I first started working with Aurora. It somehow seems fitting that this is the last single we have released together…”

Click here to listen to Berwick Rendezvous on SoundCloud

Aurora will be focussing on her Electro-Pop recordings with La Boutique and launching her career as a solo artist this year, so we wish her every success for the future!